My kid has been very fortunate in that she has been able to book lead roles in feature films and do well in regards to television co-star and guest star roles. She is by no means the top of the ladder, but she has developed a fan base and has been doing well. I am often asked by other parents with children wanting to act how we managed to land what she has been able to land. At this point I could likely write a novel on the subject. But in a nutshell here are the successful actions we as a family have done in able to aid my daughter in pursuing what she loves.

Here is the deal. My kid loves the create of it. For her its not the fan base, or seeing herself on TV. In fact she hates watching herself back because she is a perfectionist and thinks “Oh, I should have done…” From the very beginning, when she was begging us to let her do this, we have always focused her on the work of it. On a personal level my husband and I had concerns about how she would handle rejection. How she would function on set. The stress of pages of dialog to memorize. Perhaps a director being harsh or other cast members being mean or creating a hostile environment. These are things any rational person would consider before letting their child work. And believe me, it is WORK!

So we have never focused on the potential success. We have never stated she is a star or famous. The furthest we have ever communicated on that kind of thing is that she is a role model. I have always acknowledged her skills but by no means have ever stated that she is the most talented kid ever, the most beautiful, the most deserving. Because it isn’t about all of that. It’s about wanting to create something and working on what you want to create. Its about learning how 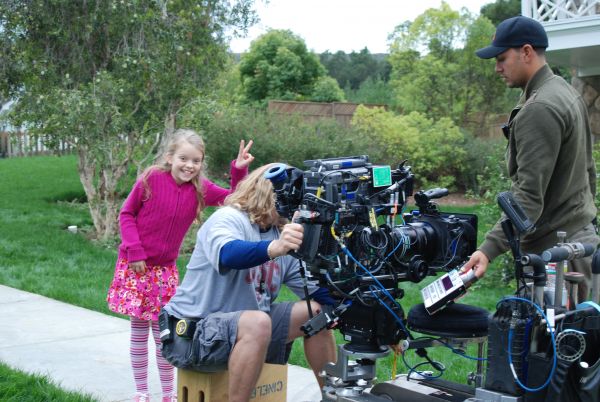 to work with others so that you can create it. She begged to act because she thought it would be interesting and fun. And in the name of that each audition is the work. And any time on set is the reward for all the work. That viewpoint alone has made it where not booking was never a heartbreak. Where self doubt was not her issue. Where ego has never sprung up to rear its ugly head. It has always been about developing skills and improving on an art form that she loves to do.

I am very very particular on who I let “develop” my child’s acting skills. I have been extremely fortunate in that I live in Los Angeles where there are a lot of schools. But with that there are a lot of bad ones as well as good ones. I started with asking my daughter what kind of projects she wanted to work on. I did this because there are schools that focus on say the “Disney style” of acting – over the top and comedy driven. And there are schools that focus more on musical theater and train you for stage. In my daughter’s case she wanted to work on the more dramatic film and television style work. There are a few ways to go about doing your research on this. You can research kids in the business on IMDB Pro and see if they have acting coaches on their resumes. Then you can look those guys up to see if they have a school. If you do not have IMDB pro or no need to cough of the money for it at this point then you can check out the resources page on myactingsite.com, or use the internet and look up acting classes in your local area. Here is what your looking for:

Like anything in this world when you start something new there are many many many things to learn. As a parent we want to help as much as possible. But we also have to gradiently move things to them to control. It used to be, when my daughter was 7 and 8, I would pretty much pick the outfit for the audition. Then I would giver her choices. Then she would pick selections and I would choose. Now she only asks what any girl asks on her way out the door, “Do I look ok?”

Now this seems like such a silly example to use. But its about the little things we do as parents. Imagine you are a kid, a little nervous, on the way into a casting office for a project. Your mom seems to think its incredible because in it is some dude who you’ve never heard of. On the way there…

“Why did you wear those shoes?”

“Sit up, posture is important.”

“Did you brush your teeth after you had that cracker? Let me check.”

“Oh, I think at that part you should look down.”

Getting out of the car mom hyper examines you. Hands you a headshot and resume and then takes you into a room filled with kids and moms all waiting to be seen.

And parents do it all the time in many things that their children are learning and prepping for. My daughter would drill the lines and drill the lines and drill the lines. That was always first. After she was steadily ready and able with lines it would be the little things. I focused on picking clothing as a part of character development. Then posture. Then pronunciation. Over the last 3 years those are the little tweaks we have done over time. A new ones will pop up next week I am sure. And on a gradient it will be figured out. But I didn’t want to suck the joy out of it by demanding she be perfect the very first audition, or the audition after that or after that. You move on a gradient. Each step, “ Ok cool, now we learned that, next we focus on this.” And you move through life in much the same way. No one expects you to read and write your first day of school.